However, a realistic implementation cannot possibly implement function application in this way. It’s simply too slow to be traversing the syntax tree to eliminate variables via substitution. Instead, the approach most commonly used is to track a map from variables to values called an environment. Rather than eagerly substitute away the variable x in the body e of an abstraction such as fun x -> e at the moment of an application such as (fun x -> e) v, the interpreter instead augments the current environment with the mapping x -> v. When the variable x is encountered during the evaluation of the body e, the interpreter looks up x in the mapping and finds v. The outcome is the same as if we had eagerly computed the substitution [v/x]e and evaluated the result, but we were able to eliminate a traversal of the syntax tree for e!

This environment-based approach to evaluation raises some eyebrows. The expression being evaluated might contain variables now – that’s the whole point! The upshot is that the implementation of first-class functions needs some additional care when using an environment. To see the problem, consider this definition of a function g : int -> int -> int.

Now suppose further that we want to evaluate g 2.

In a substitution-based approach, we replace x with 2, calculate 2 * 2, replace y with 4, and ultimately produce the function fun z -> 4 + z. No problem: the variables in the function body are just z, the parameter of the function.

In an environment-based approach, we associate x with 2, calculate x * 2 by looking up x, associate y with 4, and ultimately produce the function fun z -> y + z as we don’t evaluate under a fun.

Clearly, we cannot return only fun z -> y + z at the end. That would be throwing away the fact that y -> 4, which is essential to evaluating that function! In other words, that function contains a free variable y! What we need to do is to return not just fun z -> y + z, but also the current environment y -> 4. This way, if we later apply the resulting function, then we restore the environment y -> 4, augment it with z -> v for whatever v we’re applying to, and successfully evaluate y + z since the environment contains a mapping for both y and z.

This is the key idea: functions evaluate to a pair consisting of the function code together with the current environment. Such a pair is called a closure.

The code for an evaluator using this strategy is beautifully simple.

Alas the beauty of this approach will slightly suffer if we allow functions to be defined in terms of themselves.

At a high level, it works like this: rec f -> e binds the name f to the value that results from evaluating e, and moreover the variable f is in scope in the expression e. For example, assuming we had in our language if-expressions, integers, and arithmetic we could define a function that sums the first n natural numbers: rec sum -> fun n -> if n = 0 then 0 else n + sum (n-1).

And now let’s try to implement the high-level description above in eval. 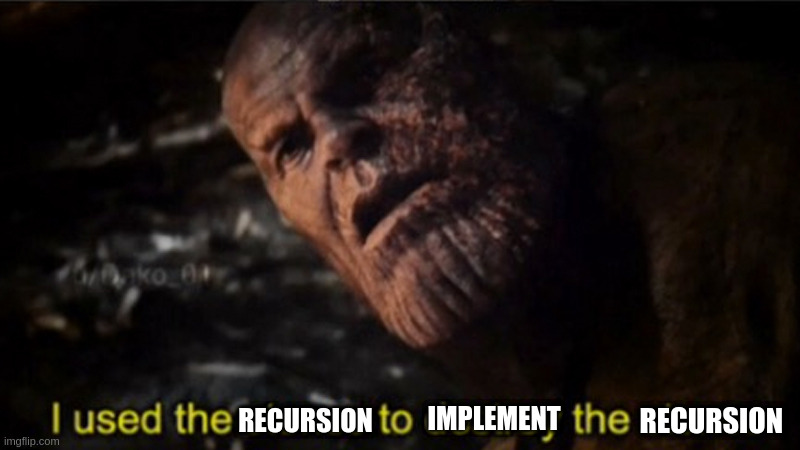 Perhaps that code hurts your head a little. That’s fine. It hurts OCaml’s head too!

To see why, recall that OCaml is a strict language: before it can make the recursive call to eval, it evaluates the argument ((f, v) :: env). In evaluating that, it would have to look up v, and thus enter an infinite loop.

(By the way, in Haskell, a lazy language, the approach above works flawlessly.)

OCaml, nauseous from staring into the recursive abyss we wrote, rejects our code at compile-time with the annoying error message “this kind of expression is not allowed on the right-hand side of let rec”. And honestly, we can’t really blame OCaml.

What we will do to resolve this is adjust our definition of an environment. Instead of mapping names to values, we will map them to mutable references to optional values, i.e. value option ref. This way, when we evaluate the body e of a Rec (f, e) expression, we associate f to None. Then, when we’re done evaluating e to some v, we’ll reassociate f to Some v.

This has a very important consequence. Whenever we look up a name in the environment, we will need to inspect the option; if it should turn out to be None, then what this means is that we’re trying to eagerly use a recursive value we’re in the middle of defining, as in something like rec x -> x + 1. To handle these situations, we will just crash the interpreter with an error message like “infinite loop”. Effectively, we only allow an occurrence of a recursively defined name under a fun, since these delay the evaluation of the function body until later, when the function is called. This is pretty much the restriction that OCaml enforces statically.

This article illustrates the difference between substitution-based and environment-based evaluation, introduces the concept of a closure as a tuple of a function and an environment, motivates the need for closures when implementing first-class functions in an environment-based setting, and shows how extend the implementation to handle recursion.

This approach to handling recursion crops up in various other settings. It happens that we want to define a value in terms of itself, but can’t express this directly in a strict language like OCaml. The “trick” is to use a mutable reference as a placeholder, and to fill it in later. This approach is called “tying the recursive knot”.

There is a related approach called “untying the recursive knot”, where we take a ordinary recursive function and apply a separation the concerns: we isolate the recursion itself from the operation done to the results of the recursive calls. For further reading, I recommend this article about exactly this refactoring.

EDIT: I also published an article demonstrating this refactoring in JavaScript.